Our very first Festival launched on Sunday 30th March at Porter’s and ran from Friday 4th April to Monday 7th April 2014 at Chapter. We put on several special events and we screened features and shorts from all around the world to packed out theatres, culminating in an awards ceremony on the Sunday evening.

Mark Foligno
Producer
Mark is a renowned independent film producer. His credits include THE KING’S SPEECH, MOON, A LONELY PLACE TO DIE, IRONCLAD and the upcoming MONTANA.

Tina Gharavi
Director
Tina has been hailed as one of the most thought-provoking storytellers of her generation. She recently completed her BAFTA nominated feature, I AM NASRINE, and is in development on her second feature, THE GOOD IRANIAN.

Helen Grace
Distributor
Helen is the Manager of MONSTER PICTURES UK, the British arm of the Melbourne-based distribution and production company; and is the owner of LEFT FILMS, a multi-platform film distributor that specialises in indie genre movies. 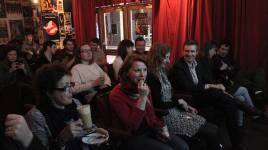 A packed screening of MAGPIE, the latest feature from COLIN Director Marc Price, plus a selection of shorts from around the world. Finished with a highly entertaining Q&A with the team behind MAGPIE (and a spot of live music). 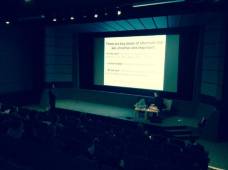 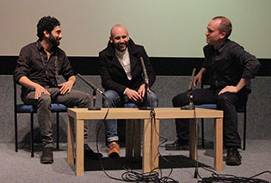 Director Keri Collins and Producer and Star of CONVENIENCE Ray Panthaki presented their new feature to a hundred strong crowd. The comedy, which also stars Vicky McClure (THIS IS ENGLAND) as a frustrated clerk, and which features performances from Anthony Head (BUFFY) and Vern Troyer (AUSTIN POWERS), was met with rapturous applause, as was the post-screening Q&A, hosted by the inimitable Tom Betts (SECRECY).

If you’ve ever wanted to work in front of or behind the camera, this event was for you! Almost a hundred people crossed the threshold to discover some exciting opportunities with our exhibitors, which included Panik Attak Productions, Red Wire VFX, 411 Films, On Par Productions, See Monkey Songs, Screen Network and BECTU. There were also actors, directors and producers a-plenty – plus appearances from Mark Foligno (THE KING’S SPEECH) and Welsh songstress Charlotte Church (pictured). 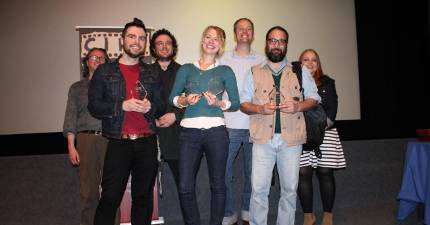 And the winners are:

THE EXTRAORDINARY TALE OF THE TIMES TABLE

BUT MILK IS IMPORTANT

Aïda Ballmann in THE EXTRAORDINARY TALE OF THE TIMES TABLE

Nondescript insurance salesman Capra (Rudy Goddin) is rescued from a mugging by an unknown woman. Convinced they are meant to be together, he decides to follow her and ends up being drawn into a surreal and nightmarish world where to love is to end up at very close quarters with death.

In this atmospheric drama, a Parisian woman travels by boat to Ibiza, invited by her childhood friend, Sandra. Very quickly, she finds herself in the middle of a cult where the suicidal master intends to lead them towards an apocalyptic end.

This absurdist take on relationships, alienation and communication is loosely based on Kafka’s Metamorphosis. A woman known only as ‘She’ (a remarkable debut by Aida Ballmann) lives a bizarre, isolated existence, sending unsolicited letters to strangers. When ‘He’ (Ken Appledorn) writes back, a fairytale romance begins. But the pressures of life begins to mount and things take a dark turn.

Pied Piper is a satirical tale of a simple laundryman, Chunnilal, who is rumoured to have acquired his beloved donkey’s brains in a freak accident. Charming millions with his asinine conscience, Chunnilal soon rises to become the most popular hero of his time, whom the establishments starts to fear. Laced with black humour, the film mirrors the current socio-political situation in India and will remind some viewers of Hal Ashby’s Being There. 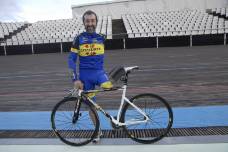 Unstoppables demonstrates how a great misfortune can be the starting point for new and extraordinary life experiences. Juanjo Méndez lost his left arm and left leg in a motorcycle accident twenty years ago. After a period of denial and sadness battling with the changes in his life, he decided to fight back and took up cycling. This led to him founding a cycling club, “The Pirates”, which helps others better themselves. In this inspirational documentary, we follow him on the road to the Paralympics in London 2012.

Short Films
Each of the ten short films in competition were nominated for Best Short. They were shown alongside the competing feature films.

It’s Christmas Eve and the army wanders the streets of a post-apocalyptic city. The city has been desserted, save for an old man, who insists on returning home for dinner.

Little Block of Cement With Disheveled Hair Containing the Sea

A dog and a mare embark on an adventure in this magical tale.

The 40s. A boy with special abilities is kidnapped by a mysterious organization named The Corp. After years of training, this boy, now a full member of The Corp, will be forced to make a decision. How far will he go to get his past back?

The Case Of Mary Ford

New York City, 1913. Immigrant Mary Ford is accused of killing her lover. But she claims the real murderer is her husband, who has returned from the dead.

BEST SHORT: But Milk Is Important

A man with social anxiety gets his life, full of routines, drastically changed.

Leroy Diaz Is A Jerk

Leroy Diaz, thirtysomething and outrageous toy hoarder, leaves his dignity behind in order to acquire a valuable piece for his collection.

It’s been twenty years since the terrible events that befell Little Red Riding Hood, but she still fears that the past may come back to haunt her.

Ray lives alone. He likes to keep himself to himself. Unfortunately, you can’t choose your neighbors.

Out Of Competition
These films were simply too good not to show!

Whenever Lothar sneezes, things happen to explode. To protect the world he locks himself into an isolated subterranean home. One day, he breaks his beloved toaster and feels compelled to leave his residence.

It is a day like any other for Tony Bianchi, a respected doctor of a small village. However, his daily encounters with the colorful characters of the town will reveal a truth about his place in a small and rather weird world.

On her birthday, Emma discovers that her life may be a lie. Are her lover and her friends all paid to be around her?

An exhausted man staggers through the desert. Between the heat haze and the blazing sun, he catches a glimpse of a strange hotel.

The true story of an amazing and relatively unknown Brazilian UFO event, which took place in the quiet city of Casimiro de Abreu in 1980.

Ry is eclipsed by the shadow of his charismatic, daredevil best friend Dusty and the memory of his Vietnam war hero brother. He must overcome his greatest fears to escape the confines of his small town and go on to become ‘A Great Man’.

To the Other Side

An author and her lover are consumed by a belief that, hidden in an abandoned mansion, there lies a gateway to the unknown. Years later, a student, fascinated by their story, leaves in search of the portal.

A family man deals with his wife and daughter’s addictions…